More Relaxed Than I Thought

I know, I know. After months of silence, I've written two blog entries in a week.

There's pizza at stake. Yes, this is serious.


The water always brings me home.

I sigh as I ease myself into the hot bath water.

This is a reward, and frankly I could do with a few more of those.

As the heat washes over me, it occurs to me that my hectic life offers little by way of solitude. What with the constant companionship of manic badgers, a necktie-stealing lion and my indefinable best friend Max Tunguska, a soak in the tub may be the closest I get to being alone in an average week*. Or relaxed, even. 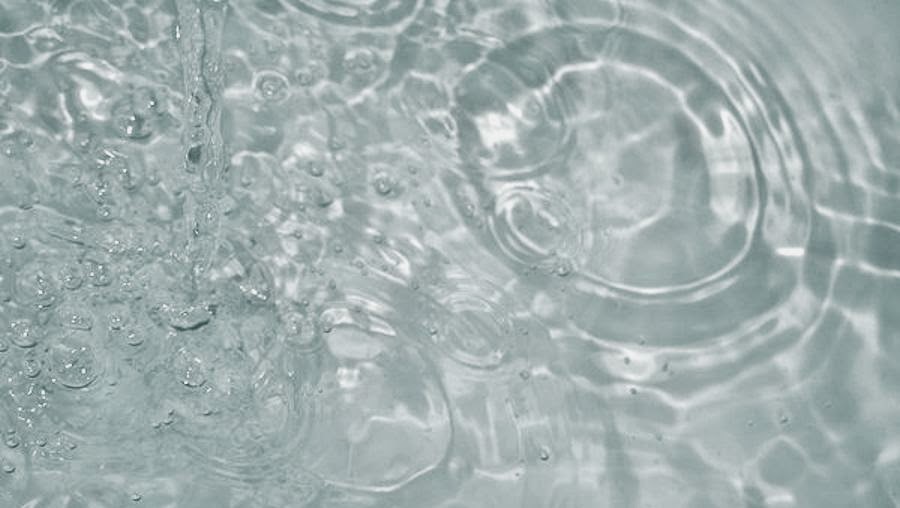 And it is relaxing in here. The bathroom is very plain, fully tiled in white with a polished wood floor, and is brightly lit with diffuse overhead panels. I've often thought it has a surgical, almost sterile quality to it**. I did think once about killing the lights, and dragging some candles and a boombox in here for some "salle de bain" ambiance, but on the whole it's just my vertebrae and muscles that need the attention.

The old-fashioned claw-footed ceramic bath - sat squarely in the centre of the room - isn't quite as long as I'd like (one of the few disadvantages of my height), but the water is hot and deep and I can feel warm relaxation oozing through my body.

A bubble breaks the surface of the bath somewhere between my raised knees.

This is not unusual when I bathe, tho clearly I'm more relaxed than I thought.

But then a stream of bubbles starts to rise from the water. I sit up slowly, experiencing an odd mixture of alarm and curiosity, as the flow becomes more determined. Wow, it's getting pretty strong. In fact, I'm being lifted from the bottom of the bath by the updraft! Instinct hurls me splashily over the side in an indecorous pink streak.

Two black furred hands appear on the edge of the tub, and a black-and-white figure in a brightly coloured wetsuit hauls himself up to stand where his hands had been a moment before. It's Hoth, short and heroic in a Douglas Fairbanks kind-of-way. The boy badger reaches in to start hauling something upwards.

At the same time, a second - and very similar - figure vaults over the side of the bath and lands with a splash. Sollust turns immediately to assist with the unloading of what Hoth is lugging upwards. Good grief, it's an old pirate chest! As the pair start to manoeuvre it towards the floor, a suckered tentacle breaks the surface and surges upwards in a spray of seawater. The limb is long, thick and muscular; the body it's connected to must be vast! It glistens and flexes as it explores keenly around the tub, reaching and searching for something.

Without warning, a third figure rides heroically into view on a second tentacle, a shorter badger in the same bright garb, and wielding what seems to be a very heavy baseball bat. It's Dantoo. She leaps clear of the creature and begins to set about its thrashing limbs with obvious vigour, beating them away from her brothers as one of its tentacles finds my arm and snakes round it.

I scream in shock and terror.

All three badgers freeze, and turn to look at me; they hadn't realised I was here. Even the tentacles pause, confused. After an achingly-long second, the three of them nod me a trio of salutes, and return enthusiastically to their treasure-hunting tasks.

Hoth hops down from the bath to join his brother, and the pair of them drag the chest out through the now-open door, trailing seawater behind them. At the same time, Dantoo's bashing of the tentacles goes up a gear, and after a monumental blow that would have sent any ball clear out of the park - that kid is strong, I tell you - both limbs whip back into the water.

The girl badger hands me a large fluffy towel and races out the door, slamming it behind her.

I peer into the tub cautiously, but see nothing but bathwater. I can't help but stand back to examine under it for a moment. Yes, the clawed feet hold the base of the tub some six inches above the floor.

I sigh wearily. This makes no sense but - once again - I'm experiencing it.

I bet Max has got something to do with it.

My heart is still pounding, but there's a sense that the moment of peril has passed. Casting the towel aside, I slip back into the hot water. It's exactly as I remember it.

And in a minute, I'm dozing off.

The water brings me home, and I guess I'm not the only one.

I close my eyes and enjoy the solitude. 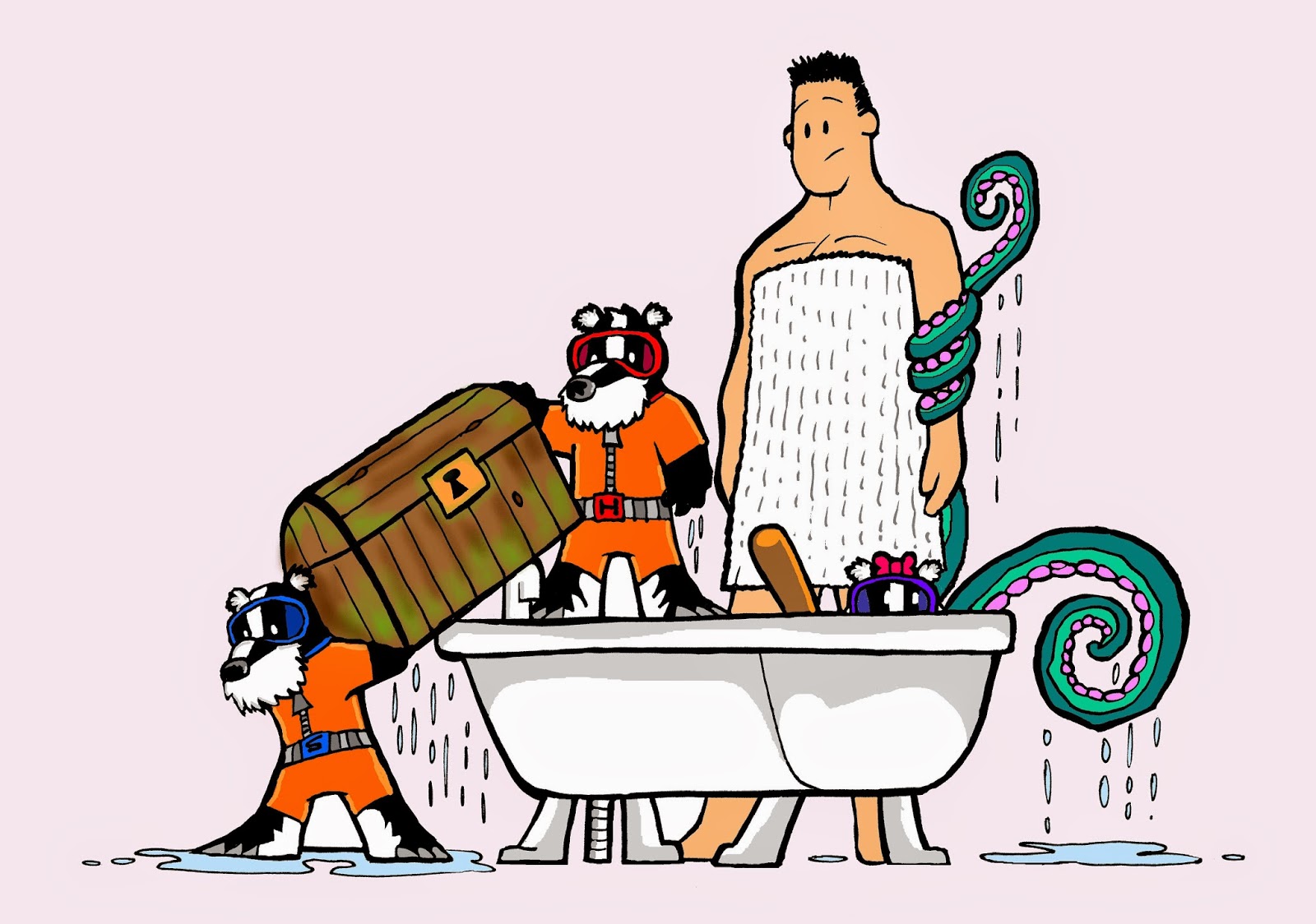 The Results are Generally Positive

This entry is dedicated to my friend Lisa Chapman, who has pleasantly "encouraged" me (and ultimately bribed me) to write something new. It's been a while. Thanks Lisa!


One of the prime delights of a warm Spring day is a sit in the garden.

You know how it is: a new season, fresh air, sunshine, birdsong, and the chance to think problems through without the four walls peering over your shoulder.

All things are possible.

And so it is today.

I'm in a recliner under the big oak tree in the back garden, enjoying the scent of blossom in the shade of noon. My eyes are closed; this helps my concentration*. Tiny motes of warm sunlight dance lazily behind my eyelids as the tree moves in the light breeze.

[ * Allegedly. It certainly helps me focus when trying to nap. ]

I sigh and embrace the moment as my mind turns the problem over...

A light tickle on my knee results in a gentle twitch from me as my ancestral memory-of-a-tail flicks a fly away. A second tickle and a stifled giggle a few moments later raises my head from the recliner as my eyes open.

My first glance takes in blonde hair, a bright dress, and a big smile.

Hey Abbey, I say, as my own smile trots into view. It's okay, I wasn't asleep.

Oh, I know, says my neighbour easily, stooping for a moment to admire the snowdrop and crocuses around the tree. I'm sorry to disturb you, tho; I could see you were thinking. This sounds like teasing, but I know she's not joking. I idly wonder what colour my aura was a moment ago?

Oh, to see ourselves as others see us, I sigh. She beams at this misquote of Burns. I move my shoulders to wake the muscles up and then meet her eye. What's up?

I was hoping I might ask a favour, she says. I nod and make an affirmative noise. Would you mind picking us up from town later? She clasps her hands together in an endearing fashion. Around four o'clock, please?

I frown; this might be a problem. But I juggle a handful of tasks and priorities in my head, and the results are generally positive.

Not a problem, I say, I have one big task to do this afternoon, but I'll be done in plenty of time.

The problem is hanging over me, but I'm pretty sure I can sort it.

You’re sure? she asks, running her hands through her hair lightly. My mind hiccups, but I recover magnificently.

Yes, it's to do with the car, but the lads will be helping me. She nods, juggling her own thoughts; Hoth and Sollust are very competent young engineers, but she knows the boy badgers are easily distracted. It'll be fine, I reassure her. Anyway, who's "us"?

Oh, Dantoo and I, she replies, glancing back at the house. I've promised her a look at some lovely old folklore books in the University library.

Folklore? I'm intrigued. But before I can ask, Dantoo comes out of the open back door. The young girl badger strolls up from the house, carefully carrying a glass of what looks like lemon fizz. This takes a while; her black-and-white legs are only little. She presents me with the drink with a smile and raises an eyebrow.

Thanks, I say, sipping. It's sharp and cold, perfect for the day. Mmmm, that's perfect. She nods happily, and turns to tug at the hem of Abbey's print dress. As my neighbour looks down, Dantoo points at her wristwatch, a chunky thing in pastel plastic. A tilt of her head indicates the question.

Abbey nods. Yes, Indigo will pick us up at four from the library. Do you know where your brothers are?

Dantoo indicates with a looping wave towards the house and a wild flourish that the duo are doing something indeterminate but worrying in the front garden.

Abbey and the youngster step closer. I receive a peck on the cheek from the pair of them, and they head off. I'll send the boys your way, calls Abbey over her shoulder. Have fun!

A moment later I'm left with my own thoughts in the garden.

I take another sip of the drink; it really is perfect. And then, settling into the recliner again, I turn my mind back to the problem.

But instead of closing my eyes, this time I stare up into the high branches of the oak and regard the problem directly.

I have no idea how Hoth and Sollust managed to get my car up in this tree, but I hope they have a plan to retrieve it that involves neither a saw nor explosives.

Yes, all things are possible.