In Awe Of Barefaced Talent

Putting stuff in pigeonholes is a typical response to discovering anything new.

For example, when I saw two dozen badgers doing a rehearsal of a synchronised dancing and swimming routine in the garden pond, I immediately filed it under New Wave Buzby Berkley.

Shallow of me, I know.

So, when I tell folk how much I like the new album by Turtle Soup, they always ask me what it's like. But despite all my years of pigeonholing things, I never have a clear answer; it's terrific stuff, and hard to categorise. 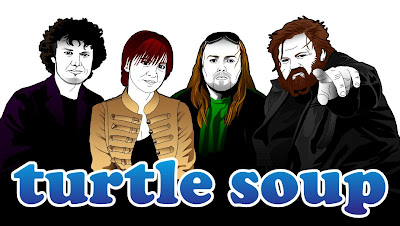 This piccy (L to R: Roger, Fran, Phil, Steve) is one of mine, and sans logo might be used by the band at some point. By the way, the picture is definitely worth a click. Lots of cool detail.

The new album, their second, is called Never Alone. Six tracks, dark and elusive, and very rewarding. And ahead of the album's CD release, the band have decided to make all of the tracks available to listen to; just click here to launch their website.

But can I pigeonhole it, musically? I know you want me to.

Well, I sometimes say it's folky, but less so than their first offering.

And sometimes I say it's alternative, but that's more of a battered bucket than a useful description.

I think the offical music biz line is that it's progressive folk, but the best description I can think of is that it's bloody marvellous!

That gets people's attention. And better yet, it's true.

Go on, check out these lovely talented people! *

[* UPDATE - if you feel so moved, I've been told that you can buy the album as a download from Amazon and iTunes, and that a physical CD release is coming soon. 10% of the proceeds from Never Alone will be donated to The Marine Conservation Society, the UK charity protecting our seas, shores and wildlife.]

Right, the badgers are filming tomorrow, so early to bed.

This blog entry is protected by copyright © Indigo Roth, 2011
Posted by Indigo Roth at 10:34 pm