The waking moments of any day are precious. Indigo?

They are a wonderful blend of reverie and reality. Roth? Rise and shine!

It is in them that the shape of the day is revealed.

My lids open to a close inspection from a pair of golden eyes. 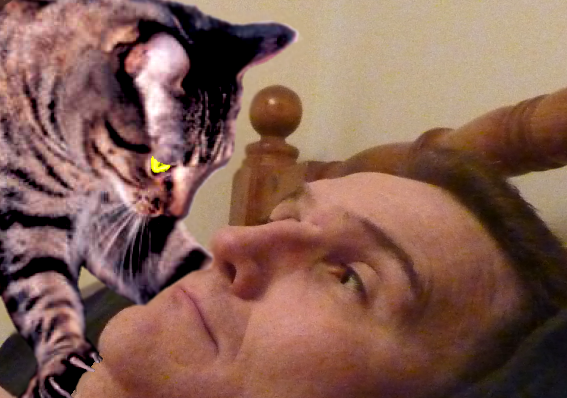 I'm sorry, did I wake you? purrs the quiet, feminine voice.

I wonder idly if I'm dreaming; my waking moments are unreliable of late. I start to sit up, but the tabby cat has retreated from my face, and is now manoeuvering herself onto my bare chest. The faintest of needles from her small paws silently encourage me to lie still. She settles, upright and imperious, a pleasantly small feline with unusually symmetrical stripes. And a warm tush. There's the faintest scent of gin.

It's a pleasure to meet you Mr. Roth, she lies without a trace of irony, or may I call you Indigo? She seems very familiar, but I can't place her, nor her American accent. Michigan? Cleveland? Tho, to be fair, I don't know any talking cats.

Waitaminute. A talking cat? A talking American cat? Ah. The dime drops, and I realise that it's a Minnesotan accent.

Liza Bean Bitey, I presume? Of the Minneapolis Biteys? My mouth feels dry, like I've been chewing cat litter in my sleep. I hope I sound less apprehensive than I feel. And that I'm wrong about the cat litter.

Mmmm, she purrs noncommittally, Pearl said that you were a smart one. For a male of your species, that is. She is of course referring to the Minneapolis blogging legend Pearl *, a friend of mine. And as far as any cat is owned by anyone, Pearl is the owner and - to her eternal frustration - responsible for Liza Bean. This carries quite a price tag on both her patience and finances. I mean, just the tuna alone...

[ * Click this link. You'll thank me; Pearl is a fabulous writer.]

Hey! Ow! Stop that! The claws are a fraction of an inch deeper, begging for my wandering attention. Liza Bean tilts her head with faux empathy at my discomfort.

Apologies. It's a balance thing. You are rather... round. Good manners and insults; she must have gone to an expensive feline Finishing School. Probably Swiss. But, answering the question forming in my mind, she continues. I thought we might have a chat.

Okay. Sure. I clear my throat. So, you're a long way from home. How's that?

Oh, you know how it is. She sighs, bored. The nomadic life of an international musical artist.

You're kidding?! I sound genuinely excited, despite myself, SQUEAK TOY are touring?! The Minnesotan all-cat jazz/blues fusion quartet are a legend in their home town, but I had no idea they were broadening their horizons; leave it to a cat to try and take over the world.

Yes, and our manager insisted that we take in your quaint little island.

Really? Who's your manager?! I hope it's Pearl, and that's she's with them.

Me. She licks a paw smugly, compensating the shift in balance with a faster and more painful grip on the other. And of course, we had to visit Cambridge.

Well, of course, I wince, the history, the architecture...

She stops in mid groom, her paw hanging in mid air. Architecture is for primates. No, there's a good reason. She sniffs. Part of is that the tour bus broke down. Right outside your house, in fact.

Now, that is a stroke of luck, I say sourly, but wave a vague hand in the direction of the back garden. If you'd like some assistance, we have several badgers on hand who can fix...

Yes, yes, she dismisses gently, I've already had words with them. They were happy to help. It seems there's inexplicable razor thin slashes in some of the engine pipes. Her gaze is momentarily attracted by the wanderings of a fly above my head; her tail flicks playfully, and her voice becomes distant. I have no idea how that could have happened. She turns to face me. Badgers are such competent engineers, don't you think? She phrases this in such a way that the compliment sounds far more like filthy feral creatures. I frown, unhappy with the way this is evolving.

So, did you wake me to ask if you could stay for a few hours?

Again, the tail flicks happily. Not at all, she smiles, your charming lion friend let us in as he was heading out, and your bear has been helping the band set up downstairs. Liza Bean glances at my bedside clock. They should be almost done...

On cue, the amplified sound of a swinging band strikes up, and they launch into a remarkable rendition of Big Noise From Winnetka. Ignatz D. Katz's upright bass work is fast and bright, Hairball's piano is melodic and loose, but Stumpy “Lucky” Strikes on drums is in a world of his own, and plays a striking resemblance to a heyday Gene Krupa.

That's terrific! I gawp, my irritation blown away; I've heard the foursome's breakthrough album, Not A Can Of Worms, but this is something else. You guys are even better live!

And better yet with me on violin. The look is smug. A little too smug, in fact.

Ms. Bitey raises an eyebrow, which somehow makes her resemble Death taking a good run up, about to swing his scythe. Excuse me?

So, I say, changing subject, if it's not the tour bus or the rehearsal room, what can you possibly want from me?

The reply is cool, calm, definite.

We're here for the lobster. I frown again, and the commanding cat spells it out in tones I would reserve for a slow child. Your lobster. From Maine. In your fridge.

Lobster? I bluster a little, What makes you think I have lobster?! I'm not sure I'm very convincing. I like lobster. A lot. In fact, to the point that my picture is in circulation on badly-printed cautionary fliers in the crustacean world: pliers, bib, Have You Seen This Man, the works.

Pearl occasionally buys what she laughingly calls "the good shrimp" says Liza Bean, and tells me that one day we'll get "some of the good lobster like Indigo always has". What?! Dammit, that's my dinner; I think fast.

Well, I don't have any right now, so I'm afraid you're out of luck. It's no good, I'm a hopeless liar; she's not buying it. Though obviously, if I did, I'd happily share it with four marvellous musicians. I croak the last of that, feeling myself wilt as the gorgeous golden gaze grows steely.

I assumed that would be your reaction, purrs Liza Bean, so I enlisted some help.

There's a knock at the door, and a moment later it opens to reveal the ever-smiling gaze of Abbey, my next door neighbour. Seeing I'm awake she breezes in barefoot, the smell of sunflowers accompanying her, and tickles an appreciative Liza Bean behind the ears.

Oh, there you are! Are you two making friends?! gushes the lovely blonde. Oh Indy, isn't she a beautiful kitty?! Liza Bean miaows, grinning up at Abbey in a closed-eyed, adorable fashion which is clearly designed to snare unwary owners of albacore tuna.

Lovely?! I rant, exasperated. She's a manipulative little wretch who's only here to steal my food!

My neighbour cooes over Liza Bean, and picks her up. I hiss in pain as the claws come free from my flesh, but the cat yowls louder to cover it. Abbey glances down and scowls at me, as if it's my fault that I'm being assaulted. She kisses the playful moggy's nose as she pops her over her shoulder.

Don't be mean, Indigo. Stroking Ms. Bitey's stripey back, Abbey turns to leave. Now, let's go see if we can find you some cream and some of old Mr. Grumpy's yummy lobster tail from the fridge. Liza Bean does her best Cheshire Cat impression at me from Abbey's shoulder and waves a paw as the pair retreats from my bedroom.

Downstairs, the music is rocking.

Rolling over, I discover cat litter scattered across my pillow.

I flick it clear, fuming, and try to get back to sleep.

This blog entry is protected by copyright © Indigo Roth, 2012.
Dedicated to Pearl and Liza Bean Bitey (Of the Minneapolis Biteys).
Posted by Indigo Roth at 11:08 pm