Tonight's blog entry is a tale of obsession.

Back in the late seventies, when I was maybe ten years old, I was tormented by this advert for the Micronauts toy range: 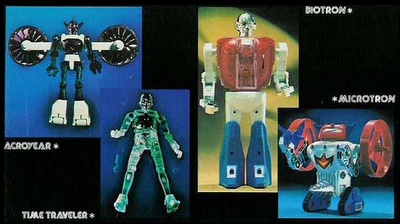 I adored the Micronauts toys, and owned them all.

I had a Time Traveler, a Biotron and a Microtron and many of the other actions figures and vehicles in the original manufacturing run.

But I could never buy an Acroyear.

As a healthy lad with "completist" tendencies, this drove me crazy. Man, I wanted that damned thing. Real bad. It was way cooler than all the others. It had wings, huge feet with wheels, and I knew from another photo that it even came with a shiny sword!

It probably flew, for heaven's sake!

I live in the UK as you know, and back then there were no big toy stores like Toys'R'Us. Just small highstreet shops. It really wasn't a shopper's paradise. But nevertheless, I set my mind to the task of getting an Acroyear.

I dragged my parents into every toyshop I saw for over a year, searching for this damned figure. I asked shopkeepers about it. They shrugged and said Maybe sometime soon. And I kept on looking.

Months passed, and I became increasingly desperate. I begged store owners to find out how to get me one now. I couldn't wait any longer! Had I not been spending someone else's money, I would have promised them a tenfold increase in price just to put one of these beautiful, elusive, and unbelievably cool toys in my hand.

I even wrote to the company in the States, asking why I couldn't buy one. They never replied.

And eventually, beaten, I moved on.

And when I became a man, I put away childish things.

Then an odd thing happened a few weeks ago. I saw an Acroyear for sale on eBay. I smiled and basked in the glow on nostalgia for a moment. My, how I'd longed for one of those when I was a kid. Yes sir, I surely did. Thirty years ago. Thirty. Years. Man, that had bugged me at the time. I'd tried so hard. The very thought of owning one had excited me for months, and then it made me miserable for twice as long when I couldn't get one. Why had it been so hard?

Damn, I had wanted one.

Damn, I still wanted one.

Involuntarily, in the present, my eye twitched.

I placed a bid, then another and another. For two days I watched and bid on the bloody thing, the price slowly creeping up. I eventually won, but had to cough up close to fifty bucks to pay for it and have the thing shipped to me from the States. Had I bought an unopened "NRFB" (Never Remove From Box) figure from eBay, it would cost me two or three times that amount.

There's a lesson in there somewhere.

Anyway, my Acroyear figure arrived today. The figure was sold as used, with no box. It looks played with and well loved; it probably gave some ten year old kid hours of enjoyment back in the late seventies.

And it's complete. Just as I imagined. Wings, wheels, even the shiny sword. Here it is: 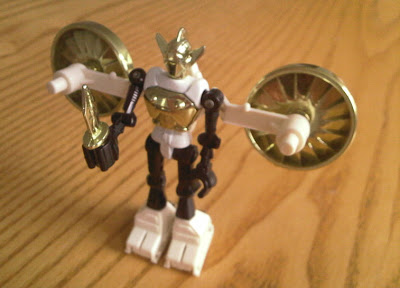 It's just as well I didn't spring for the unopened original; it would have been a waste. I wouldn't have been able to leave it in the box.

I wanted to hold my Acroyear, just like I never did as a kid.

And hold it I did.

For fans of Charles Foster Kane, this is my Rosebud.

This little man now sits on my window sill at work, next to the big man who owns it. If anyone asks, and I hope they do, I'll tell them the story I'm telling you. They'll see me smile and think I'm weird, no doubt. A forty year old playing with toys.

You have to be obsessive to understand obsession, and the strange things it makes us do.

And now, of course, the punchline. While I was searching for pictures of the original advert at the top of this entry, I found out two things from a Micronauts fan site.

Firstly, the UK distributors never sold it. They decided that the range was too big, and chose not to bother with the Acroyear figure in this country. No store in the UK ever had it on sale. I spent so much time and effort looking and asking and begging, and was never told that one key fact by anyone selling the toys.

Pardon me for a moment while I curse my youthful obsessiveness.

And the shopkeepers. Bastards.

Secondly, I discovered the following photo: 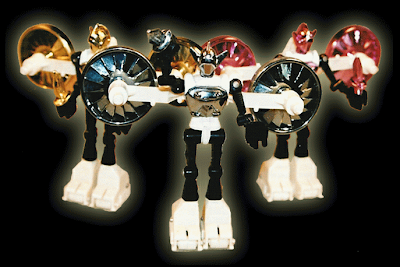 Yes, the original Acroyear figure came in not just one colour, but three. Gold, pink and blue.

Somewhere in the distance, a dog barked.

And, involuntarily, my eye twitched.

And since I wrote this, almost three years ago, I have now finally tracked down a pink one! Just blue to go! 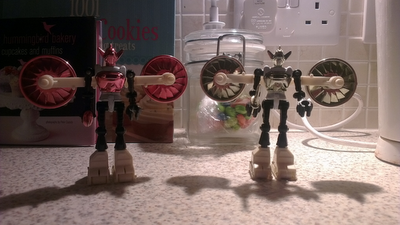 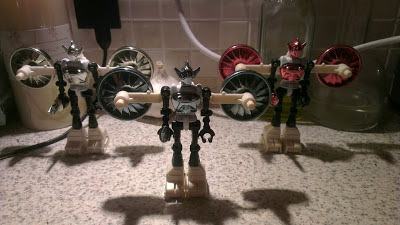