A Handful Of Minor Injuries

With the London 2012 Olympics in full swing, I can finally reveal the surprising truth about the Vancouver 2010 Winter Olympics.

The 2010 Olympic Winter Games in Vancouver has been a truly global spectacle, a magnificent showcase for alpine sport, and full of surprises.

But aside from the excitement and spectacle of the basic fifteen events, what of the demonstration events going on at Vancouver? Both summer and winter games have been light on these trail events in recent years. In fact, not since Albertville in 1992 have new sports been tried in an alpine setting.

But Vancouver has broken with this recent tradition and added in one new event.

For those new to Super D, it's a white-knuckle ride down through a mile and a half of steep mountainside. Two athletes, no transport, no limits. Just a pair of courageous drunken souls, or Plummeters, sliding on their backsides at up to ninety miles an hour, pitted against a merciless and precipitous mountain.

One week ago, two renowned bloggers received the call to join the British Olympic Team in Vancouver. Their mission? The Super D.

Little is known about the sporting pedigrees of Indigo Roth and the mysterious single-monicker iDifficult. The pair were discovered after a rowdy evening on the tiles which ended in an accidental slide down the infamous Tipplers' Tumble in their snowbound home town.

They were naturals, said talent scout Shifty Mandelson. One minute they were staggering along the road near The Tumble, and the next they were off piste. Their survival instinct kicked in instantly, and they displayed world-class cameraderie, effortless cursing, and breakneck speed. I knew we'd have a chance of a medal if we could get them out of the hospital and into the team.

After arriving at Whistler Mountain outside Vancouver, Roth and iDifficult threw themselves into training, working on a steady rhythm of beer - curry - plummet. After three days, utterly unable to tell their arses from their elbows, they were still trailing the times of the Canadian professional duo Kato Kato & David Coleman. But, determined to bring home the gold for Queen and Country, they pushed the boat out in the final few hours to get themselves really relaxed.

Things nearly came unstuck as they waited for their run at the top of Whistler. A drunken altercation with the German team ended with a Mountie being summoned. The pair, unable to produce their Olympic identification, were arrested and handcuffed to each other and then to the starting gate. They could only stand and sing Show Me The Way To Go Home quietly as their Canadian rivals posted their best time.

Just as all hope seemed lost, Roth borrowed a hairpin from passing American plummeter C. L. Larew, who was just about begin her descent with canine team-mate W. D. Hickory. iDifficult set to work picking the handcuff lock, and the duo cheered mightily as the Americans swept past the Canadians to take the lead*.

[* Larew sustained only a handful of minor injuries from Hickory sitting on her wagging his tail, using her as a makeshift sled.]

The British pair were called to race just as the first lock was picked; they had detached themselves from the starting gate, but not each other. Pluckily, they elected to make the run still handcuffed together.

As the pair leapt to their date with destiny, slurring Swing Low Sweet Chariot, the prayers of late-night viewers in Britain went with them. Their start was blistering, a tumbling whirl of limbs and off-key crooning, but they lost vital seconds arguing about the best place to stop and take a leak. Unable to find a bus-stop, they ploughed ahead, and seemed to be losing time until they bounced off a sequence of three rocks. Roth's trio of sharp cries started an avalanche and, sensing victory, the pair were carried by the wall of snow past the finish line in a record time. 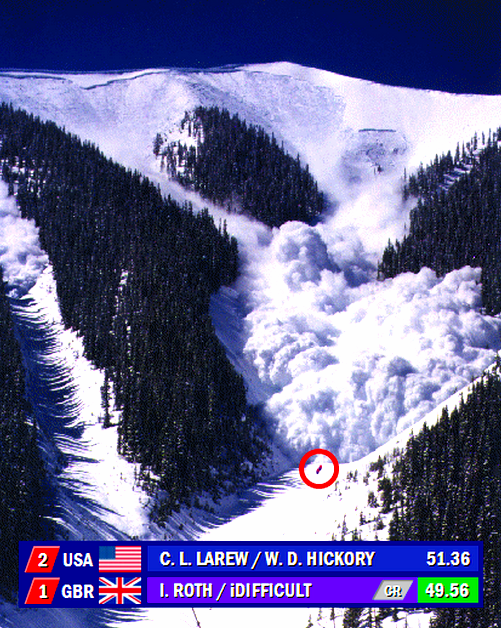 The Canadian Team lodged an appeal about the handcuffs as unauthorised equipment, but this was dismissed by IOC President Jacques Rogge as Being entirely in the spirit of the event and the Olympic Movement.

Roth and iDifficult were unavailable for interviews, but our new British sporting heroes will no doubt have plenty to say for themselves as soon as the casts and bandages come off.

Dedicated to the late legend Hickory The Wonder Dog
This blog entry is protected by copyright © Indigo Roth, 2010/2012
Posted by Indigo Roth at 6:12 pm